Wouldn’t you assume that using words was a skill transferable from one career to another? With words, I manage conflict and write. Yet, switching from Conflict Manager to writer about managing conflict changed everything about words.

As a Conflict Manager, I think fast, strip down flowery language, and integrate non-fiction stories into a coherent narrative. As a fiction writer, I pick words in slow motion, describe more than tell truths, and struggle for metaphors.

Conflict competency’s foundational skill is probing beneath Positions to understand Interests. A common metaphor for moving from Positions to Interests is (drum roll please) The Interests Iceberg.

The metaphor instructs that, like icebergs, conflicts are 10% knowable by the revealed Position a party takes. The submerged 90% represents unseen Interests, which are the real but concealed reasons a party holds its Position. Derivative from Freud, the iceberg teaches that conflicts become more solvable once Interests are known.

For a writer, all this is both true and too clichéd to be useful. Also, writers love it when people hide their massive beneath-waterline Interests anchoring their Position until the last chapters. It’s a great story that people get into conflict because they fill in great information gaps with assumptions about others. Once we know something about someone, we assume we know everything about everyone. And the writer cheers this hubris.

I still have a cliché problem.

What makes a block of frozen water, that’s endangered from climate change, the best visual for conflict management? Not only are icebergs disappearing, it’s a north/south image the majority of the world’s population won’t see firsthand.

I’ve been privileged to hike icebergs and drink straight from the melting ice; elitist experiences. My kayak rocked wildly when a collapsing monster iceberg caused a mini tsunami; rare experience. I shattered my ankle and fell beside a towering iceberg, just it and me in the frigid Arctic Ocean; unwanted experience.

The iceberg image is vivid in my memory. That doesn’t make an iceberg translatable across cultures, time, and experiences. Another hubris writers appropriate is the assumption that once I know something about anything, everyone relates to it.

The dandelion: my new logo that headlines this blog.

Complexity and simplicity are both relevant tools.

While the iceberg is a simple, linear seen/unseen binary, let’s enrich and expand it, complexifying the role conflict plays in life. 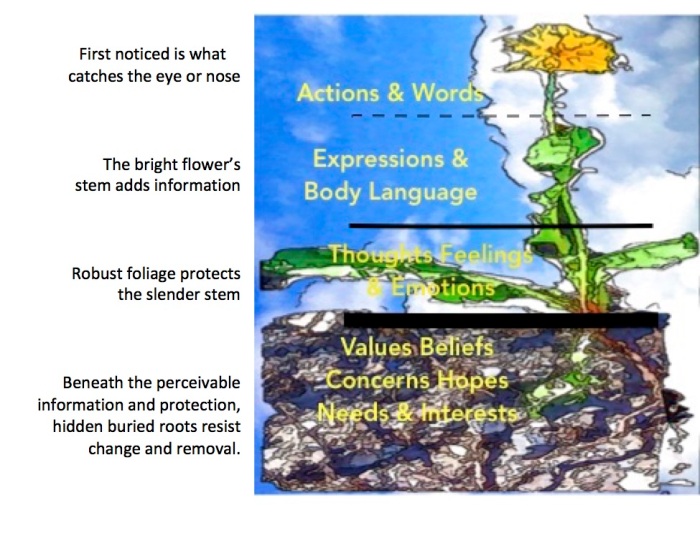 Postscript: Iceberg images are so familiar that no Conflict Manager I asked could name the photographer or graphic artist to credit the pictures; as if they are in the public domain, although someone must have used each image first. Perhaps you know who, or it’s your image. If so, please let me know so I can add the credit.